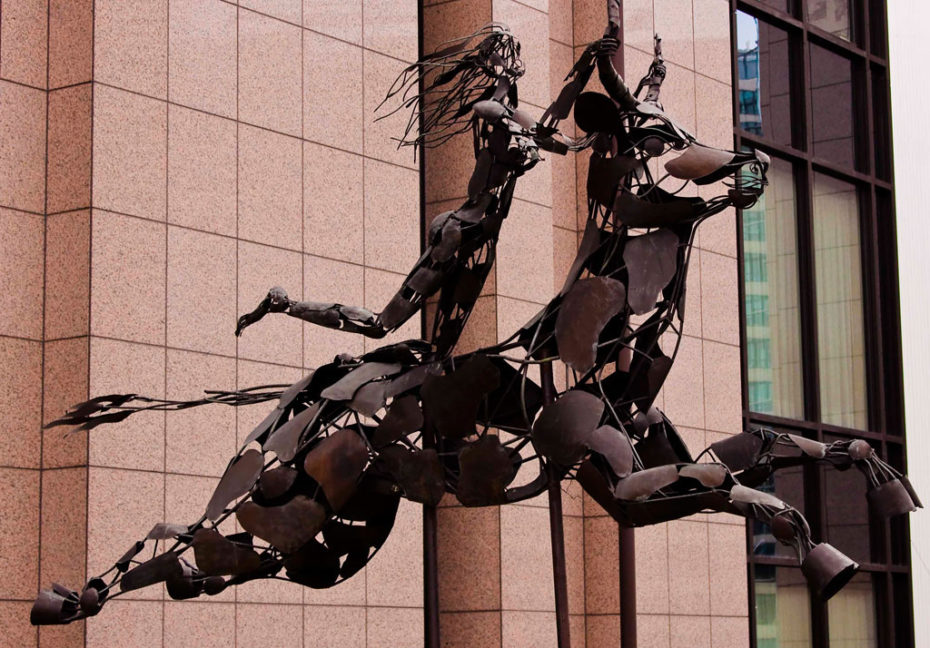 Why not show European citizens the creative potential of the EU and improve its image along the way.

I usually don’t write about politics on this platform. First of all, because it’s not my speciality. But more importantly because politics most of the time isn’t conducive to creativity. In fact, it can easily frustrate the creative process, as I explained a while ago in an article about the “The New Rijksmuseum”, a documentary that shows how a democratic process, with too many opinions influencing it, dilutes the single-minded, creative vision.

This year we’ve seen another trend in politics that is detrimental to creativity; the xenophobe world-view

This year we’ve seen another trend in politics that is detrimental to creativity; the nationalistic world-view, fed by xenophobe sentiments and more specifically a fear of immigrants. Both the ‘Leave’ campaign causing Brexit and the ‘Make America Great Again’ campaign by Trump were – among other things – rooted in a believe that immigrants steal jobs (or worse, rape and kill) and are to blame for high unemployment figures – and for many other things that are not working. The remedy: let’s close the borders and protect ourselves from dangerous, outside influences.

These campaigns obviously blatantly simplify the truth and thus purposely overlook the fact that immigrants are often ambitious and bring in new knowledge and fresh perspectives, thus potentially catalysing creativity. For example, in Silicon Valley about half of the billion-dollar start-ups is founded by immigrants and in 2016 all six American winners of the Nobel Prizes in economics and scientific fields were immigrants. 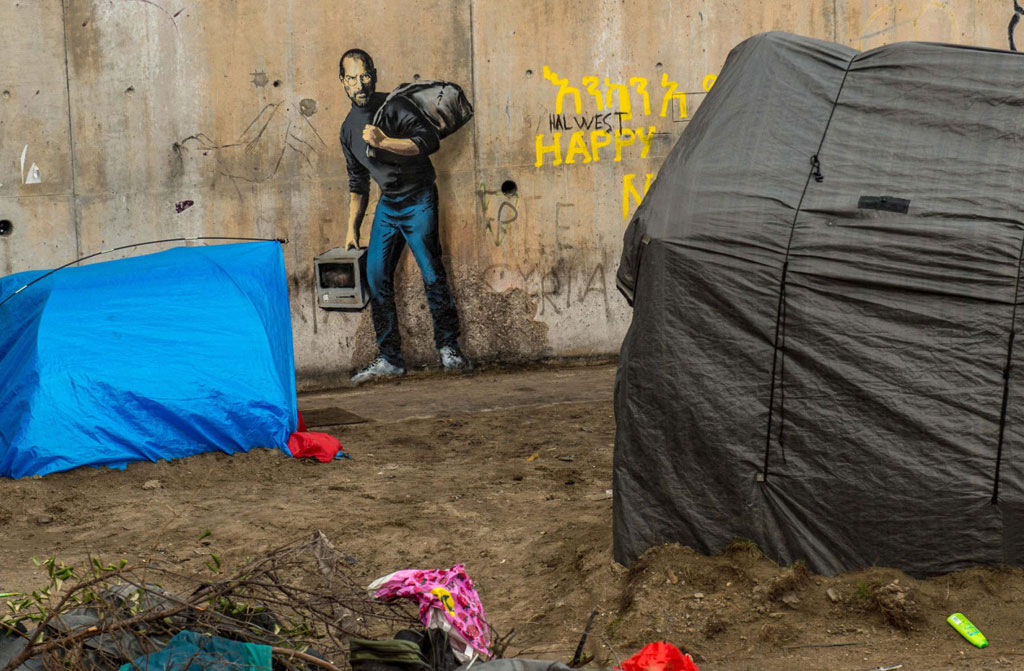 Steve Jobs depicted as an immigrant on a wall in ‘the Jungle of Calais’, to make a political statement about the potential value of immigrants – Jobs’ father was a Syrian immigrant.

As we now know, the jobless Trump-voters in the rust belt of America couldn’t care less. They want some of Washington’s or Silicon Valley’s wealth and don’t care about Elon Musk (once also an immigrant, for that matter) who in Palo Alto is creating an entirely new, 21st century-proof automobile industry, which keeps the United States economy innovative and internationally competitive – making it great again, as it were.

Since facts matter less and less in politics and innovation is a luxury the man in the street often doesn’t care about (after all, he has more imminent problems to worry about), many European governments fear that Brexit and Trump are the omens for more populism, nationalism, and protectionism. In Europe this automatically means a vote against the European Union (EU), because within this political entity (the second largest economy in the world, accounting for 23% of the world’s GDP), people with different nationalities and cultural backgrounds can freely travel and work and ‘steal’ each other’s jobs – and import strange habits and values. In the Netherlands – and many other European countries – you can sense the fear for immigrants. A fear that is partly fed by right-wing politicians who try to convince the people it’s the EU’s fault.

I find it sad to see that the EU is the scapegoat of so many Europeans who take its benefits for granted. Since creativity – and not politics – is my passion, I primarily see Europe’s creative potential. And since I’ve worked as a brand strategist for more than a decade, I think the EU should do something about its bad image and advertise its potential, rather than only talk about politics, money and legislations. That’s why last summer I wrote a letter to the EU.

To whom it may concern,

Brexit has proven once again that a substantial percentage of ‘the people’ in Europe don’t see the benefits of the EU. To me it is obvious that this is largely due to an image problem, and since I work in advertising – for already 13 years – I believe this problem can be solved. With this letter I am submitting an ambitious, but effective solution to solve the EU’s image problem.

I believe that an important reason why many Europeans don’t see the benefits of Europe is that almost all the EU-related news is about politics, financial markets and rules and regulations, which is clearly not the most attractive news for the average European. Therefore, to most people the EU is an abstract, bureaucratic entity that lives far away in Brussels and is run by techno and bureaucrats. I don’t have to explain to you that the EU is much more than that, but that’s clearly not what lives among the people. And that’s why it’s time that the EU starts to seriously think about how to win the hearts and minds of its citizens. The EU should ask itself; how can we make our citizens proud of the EU?!

Last week I had an insight that could be the beginning of a solution for the EU’s image problem. This insight was triggered by an article I read in The Guardian about how, since Brexit, the number of race-hate crimes in Britain has increased fivefold. I then thought; this is a Pan-European problem, since these kinds of problems occur in other European countries as well because they predominantly have to do with an increasing amount of refugees and the aftermath of the financial crisis. My next thought was: why don’t we solve these kinds of problems in a Pan-European way? And then it hit me; the biggest benefit of the EU is our Pan-European diversity and thus our creative power!

Allow me to elaborate; I have written a book about creativity (called Defining Creativity) and one of the most important learnings from this book is that creativity is catalysed by bringing people with different backgrounds and skills together. The reason is that creativity makes unfamiliar combinations of familiar ideas, and the more diverse the ideas that are combined, the more creative the combinations that are formed. To translate this to the EU; in Europe people with very diverse cultural backgrounds can freely travel across the continent, which means that the EU is a place where diverse knowledge and viewpoints can relatively easily synthesize into new, surprising and useful ideas. Because of our diversity, you could look at the EU as the largest idea-incubator in the world. But – as far as I know – no one has ever thought about ‘selling’ the EU in this manner.

So, to finally come to my solution; why don’t we found a Pan-European think tank that comes up with creative solutions for European problems such as refugees, poverty, racism, failing democracies, etc. This think tank would consist of prominent (and less prominent) thinkers from across Europe with different backgrounds and skills (think of: writers, film makers, scientists, NGO-leaders, journalists, etc.). Instead of “Financed by EU” (which is the only EU advertising I ever come across) the ideas of this think tank are “Conceived by the EU”, which would be an entirely new message! A message from which all European citizens benefit and a message that would generate much more sympathy and pride across the continent (and beyond) than the messages that are merely based on economic, political and legal values. What’s more, focusing on our creative, Pan-European power is also a good idea because it could help us to turn innovation into our unique selling point (USP) – a USP that prepares the EU to adapt to a world that changes with a constantly increasing speed.

Even if such a think tank would be a bridge too far (for now), I think a message that claims the EU as the most creative continent in the world would be very accessible and attractive for the European people – and beyond. Not just because it’s a more human and less abstract message than the EU-message we’re used to, but also because it celebrates our continent’s diversity. And that’s a very good idea, I believe, because a dominant fear among European citizens is to lose their local identity, language, food, and other cultural memes. With a ‘brand’ proposition centred on diversity, we say; you can keep your local traditions because that’s what makes Europe great!

I can already imagine European creative thinkers and doers explaining why they think the EU is such a good idea – backed by concrete examples of successful projects in which they benefited greatly from collaborating with professionals from across the EU.

I would love to elaborate on my idea and brainstorm about it with those who are responsible for the EU’s image and communications. As said, I am proud to be a European citizen and would be even more proud if I can contribute to solving the EU’s image problem.

I look much forward hearing from you.

The only answer I received was that my letter would be forwarded to the relevant department. So, unfortunately, I wasn’t invited (yet) to brainstorm about how to ‘make the EU great again’. I can imagine that the EU has other, more pressing political priorities at the moment. And that’s fair enough. But to me it once more proofs why politics isn’t my thing; it’s not conducive to creativity.