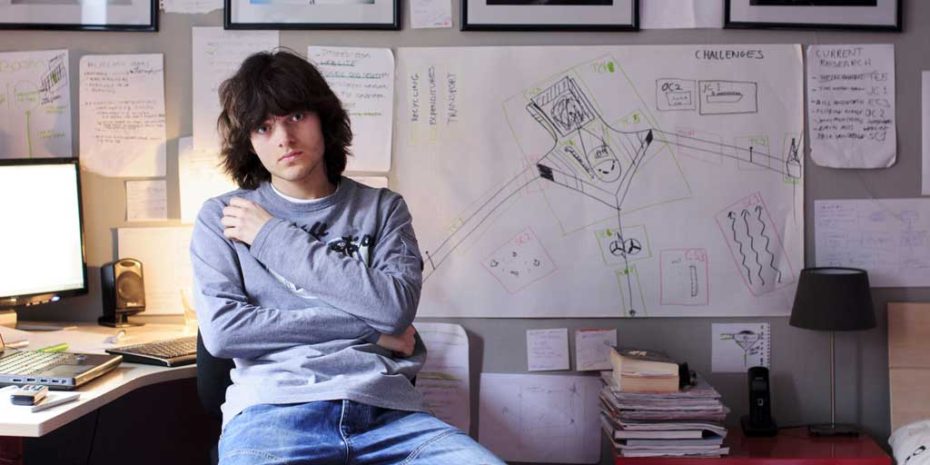 While young Boyan Slat is determined to rid the oceans of plastic, the experts keep telling him it’s not a good idea

Beginning of this month the Financial Times published an interesting article about Dutchman Boyan Slat, titled “The 22-year-old trying to clean up the Great Pacific Garbage Patch.” As you probably know, the Pacific garbage ‘patch’ is a huge circular current, topped with a layer of floating plastic garbage, which measures twice the size of the UK and contains one third of all the plastic in our oceans. Boyan Slat wants to clean this plastic soup for obvious reasons; it kills all kinds of sea life and the pieces of plastic very slowly disintegrate into smaller and smaller particles and eventually end up in our food chain.

Slat’s plan is quite ambitious. In fact, many experts have told Slat over the years that it is impossible to clean up this floating mess. Slat, however, likes to think about insurmountable challenges he told the Financial Times (FT). And he has thus come up with an unconventional solution. Instead of trying to collect the garbage in an obvious way, by trawling through the ocean, Slat had a truly creative insight: “Why move through the ocean, if the ocean can move through you?” Slat’s invention, a giant floating filter, is built on this insight and appears to be an excellent idea, because it is relatively energy and time efficient and sea-life-friendly – compared to trawling. 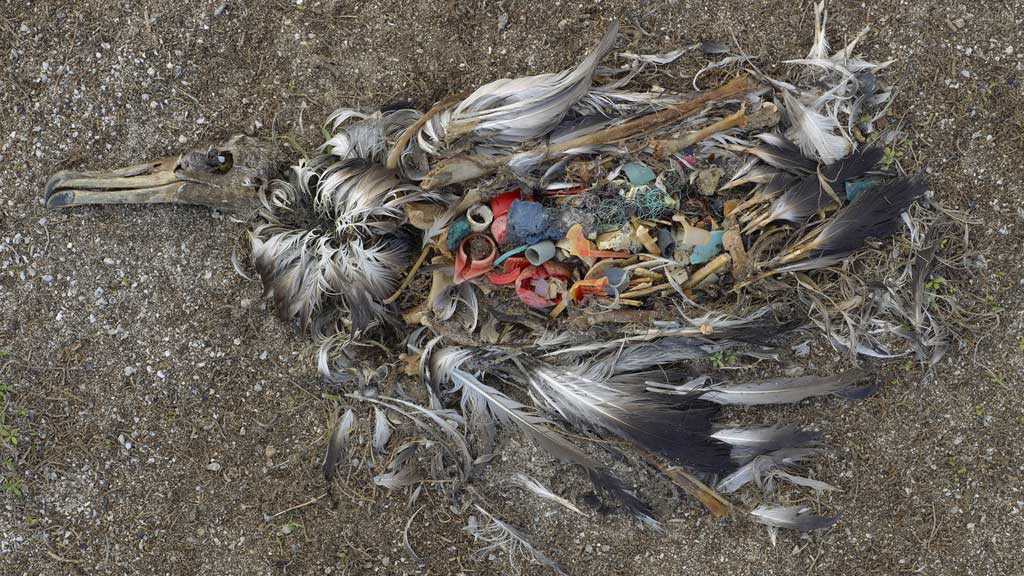 This is what happens to the sea animals who think the great garbage patch is a feeding area. Photo: Chris Jordan.

Naive self-confidence
I met Slat three years ago during a networking event I organized. At the time – officially still a teenager – Slat came across somewhat quiet and shy, but already then showed the kind of naive self-confidence required to create world changing inventions. Seemingly without a doubt he knew what was to be done to rid the ocean of plastic. He was only at the beginning of his journey, though, trying to raise $10,000 by – among other things – sending out emails to 300 companies. Unfortunately, Slat received one reply and no money. Instead of disappointingly dropping his plan and moving on with his life, he turned to crowdfunding. That worked a lot better; he raised €2m and founded The Ocean Cleanup.

Today The Ocean Cleanup employs 45 people and has just taken an important step in making Slat’s dream come true; it has deployed a 100-meter prototype barrier to be tested in the North Sea. If this robust barrier, that floats one meter above and one meter below sea level, survives the volatile North Sea, it will be deployed between California and Hawaii in 2020. The eventual barrier will be 100-kilomter long, V-shaped, with a centerpoint towards which the sea will slowly but surely push the floating plastics. In the tip of this two-dimensional funnel the plastic can be relatively easily collected every 6 weeks. Slat wants to sell the collected plastic to be recycled and thus (further) finance his endeavor. 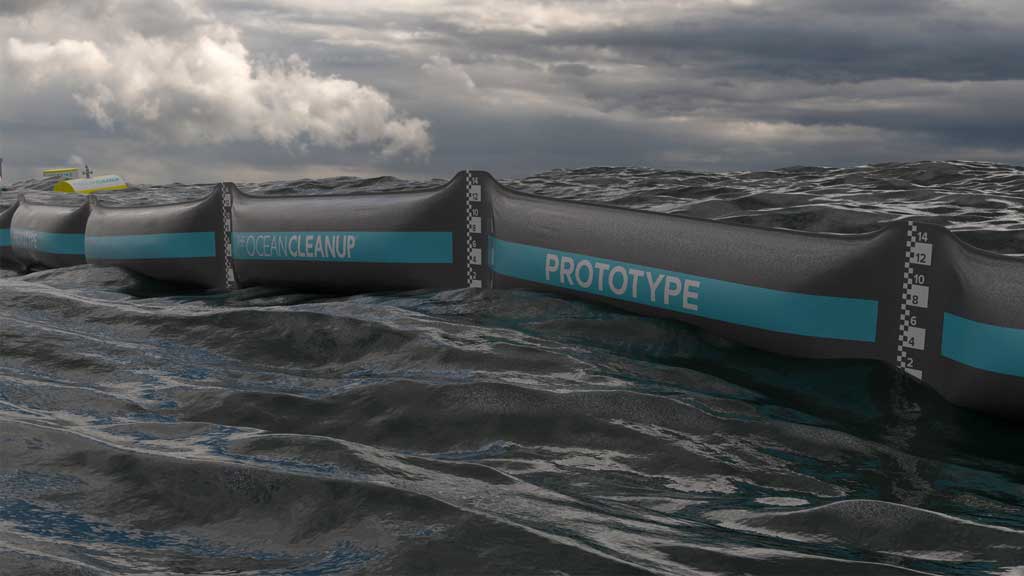 Stuck to the drawing board
Apart from the fact that Slat is a clear example of someone with imagination, self-confidence and persistence, what I found most interesting about the article are the sceptics that tell the FT-journalist they don’t believe in Slat’s solution. For example, oceanographer Charles Moore, one of the first persons to describe the North Pacific garbage patch, doesn’t believe the barrier will be ever deployed in the deep ocean because he believes the plastic is not valuable enough. Moore furthermore worries that The Ocean Cleanup gives the wrong signal to the world; that we don’t have to worry about plastic spilling into the sea. Moore prefers to come up with a solution that is truly circular and reinvents the plastics industry, so that plastic won’t end up in our oceans anymore. Though this is by no means a bad idea and even a more fundamental solution, it’s also a solution that is hard to enforce, since as the article explains it’s also a political solution that requires a collaboration between the many different stakeholders across the global plastics value chain. Which is why it’s probably even more ambitious than Slat’s plan.

Ambition, however, is never enough when trying to introduce a radical innovation to the world. An important difference between those who merely have ambitious ideas and those who actually change the world, is that the former group is often stuck to the drawing board in finding the perfect solution, while the latter simply starts to execute an imperfect idea, without exactly knowing how to reach the visionary point on its horizon.

Most ‘creative achievers’ will decide their next step along the way, constantly adjusting their concept according to the relevant and current technical, cultural or economic circumstances. So, for example, with today’s knowledge the critics might judge the collected plastics invaluable, but by 2020 there will surely be a way to recycle them. In fact, by then The Ocean Cleanup will most likely already have founded a sister company that has a smart use for it. After all, if you only have a hammer everything looks like a nail.

Fail fast
Besides crossing certain bridges once you are there, another reason why simply starting before having found all the answers is a good idea, is that investors and journalists – who can give your concept (global) attention – often want to be able to touch what you’ve conceived. Doing the maths is certainly important, but showing an elegant proof of concept can make the idea simply irresistible. So while the critics were questioning Slat’s lack of experience, scientific knowledge and funding model, Slat was already doing a TEDxDelft talk (by now viewed more than 2.5 million times) and slowly but surely drawing the needed attention to his project. What’s more, young ambitious academics, who are tired of working in a lab all day, also join Slat’s organization and bring in the required ‘maths’. That’s how an ‘insurmountable’ challenge reaches a solution that at some point becomes inevitable. 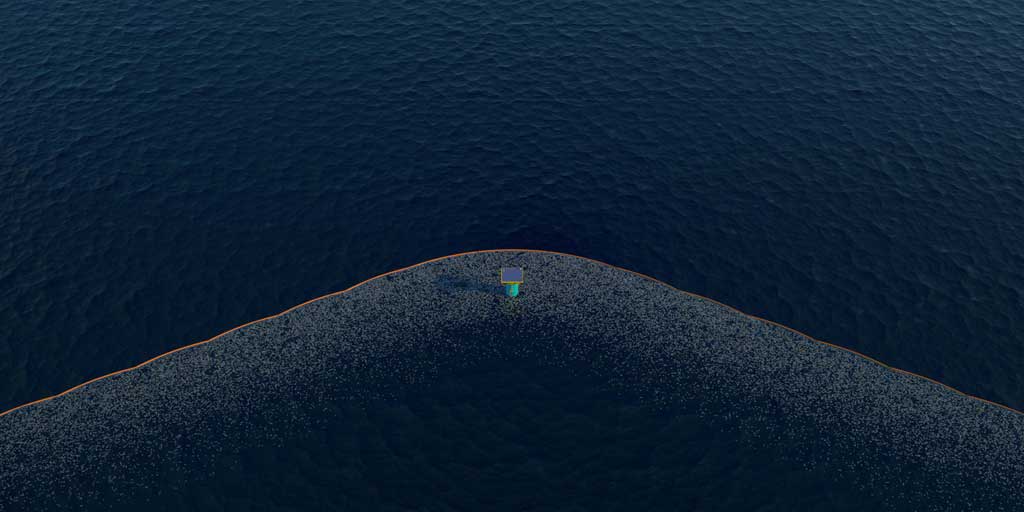 It’s no coincidence that Slat in the articles explains he admires Elon Musk’s capacity to get stuff done and Silicon Valley’s ‘fail fast’ principles, which means designing a concept in relatively small, iterative steps, allowing for trial and error. Musk also started building his electric cars and space rockets without any experience, while most experts in the car and space industry told him it couldn’t be done. Of course there are many more personality traits that turn someone into a creative achiever, but having an optimistic naivety and not being bothered by what the experts say, are certainly two very important ones. In Defining Creativity, I describe the importance of naivety and how too much expertise within a certain domain kills the ability to be creative within it:

“What most creative minds have in common is that their creative productivity and success displays an inverted-U function of the acquired knowledge of the domain. Which means that as you learn more about the rules of the domain, your creative potential grows. At some point, however, when your peak has been reached, the naive perspective and drive that makes the youth want to change the world is increasingly replaced by a mind that has narrowed down, gets stuck in patterns, and is not able deviate from the rules anymore. Which is why the established experts in a domain quickly take a conservative standpoint towards radical changes in a domain.”

Why not do something now?
In the FT-article Slat admits: “looking back, I didn’t know what on earth I was doing.” It was simply his believe that something needed to be done – or ‘obsession’ as he calls it – that got him into action. And while Slat acknowledges that a fundamental solution – like preventing plastic from being dumped in the ocean – should also be found, he simply rhetorically asks his critics: but is it not worth to do something now? Which reminds me of a wonderful quote by American General George S. Patton: “A good plan violently executed now is better than a perfect plan executed next week.”