Previous: The Architecture of Creativity 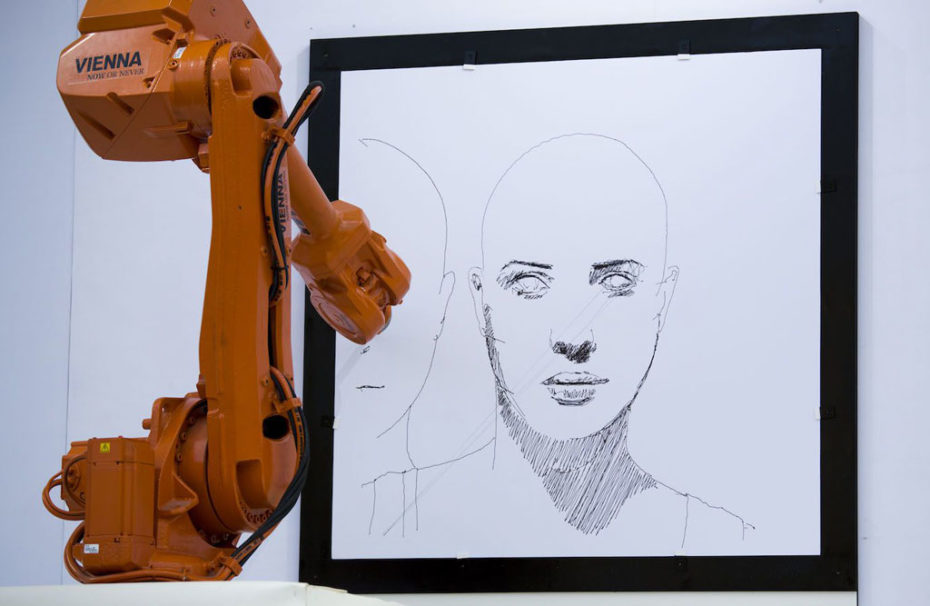 Art with an extended arm

Why primates can’t use creativity to make art and why artificial intelligence can – in a few decades.

This summer I read two different articles about non-humans making art. The first news article was about Michael Jackson’s (once) world famous chimp Bubbles, who after Jackson’s death has taken up a career in painting. The article describes how Bubbles joined the exhibition ‘Apes that paint’ at the Frames USA & Art Gallery in Miami and how his ‘abstract expressionism’ is selling for $750 per piece.

The second (Dutch) article was asking the question whether computers can make art. To answer this question, researchers from Oxford and Yale asked some hundreds of AI experts when they believe AI is able to write a book that will be featured in the New York Times bestseller list – among other questions. The average estimate was 2050. If primates exhibit their art and AI creates best sellers, then non-humans are able to make art. But is this really true? 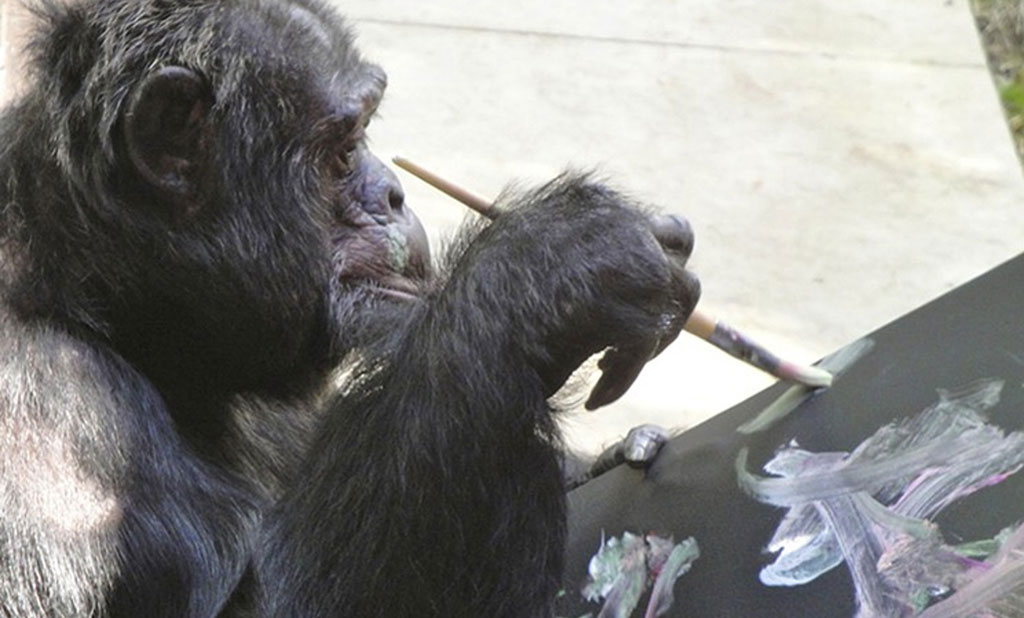 Michael Jackson’s chimp Bubbles’ paintings have been exhibited in a gallery and are selling for $750 a piece. Photo credit: people.com

Merely playing with paint
One of the definitions of art is: “the conscious use of skill and creative imagination especially in the production of aesthetic objects.” It’s not the skill (and aesthetics) that I doubt so much when talking about non-human art, it’s the ‘conscious, creative imagination’ that non-humans will struggle with. Consciously making art means that you are creating something that you want to be appreciated as art. That means that art can’t be something that becomes art by itself, independently from the artist. The artist has a vision about the world with which he creates a context around his work. So, for example; I am fed up with the rules of academic, realistic painting, so I am going to convey merely impressions in my paintings – i.e. overall visual effects instead of details. Through this contextual view on art, it becomes art.

Art can’t be something that becomes art by itself, independently from the artist

To create this context, you require a broad intelligence of how the world works, an understanding of how people are related to each other and your own position in this complicated world. A chimp that paints has no clue about this context. The fact that Bubbles doesn’t even understand that he is creating a painting for an audience, shows how the conscious element in his ‘art’ has been transferred to its keepers. In the best case he’s merely playing with paint.

Today’s AI doing an attempt at making art consists of algorithms randomly – and therefore unconsciously – applying certain rules that are written by programmers. These algorithms can only do very limited tasks, without having the general intelligence to form a vision about the world, nor a context. It can only create variations of what has already been done. So, just as is the case with the primates’ playful strokes of paint; any context given to the works has been added by human beings.

That’s why in the musical domain, for example, humans are still doing most of the work, such as making manual changes to the AI’s output to anticipate a potential audience’s taste and thus incorporating a vision into the music. You could therefore say that both the primates’ keepers and the musicians are merely using the primates and the music software as an extended arm in their own creative processes.

Falling trees
Speaking of this creative process, to answer the question whether the products of these extended arms can be creative at all, you should ask yourself the question whether the output is new and valuable. Making something new is not that difficult. AI is definitely able to create something that we’ve never (literally) heard before. And even when you more or less brainlessly splash some paint on a canvas, you will create something new. The more difficult part of being creative is adding value to a work by earning the appreciation of an audience. Which is similar to creating a context, because it has to do with anticipating an audience’s taste.

When a tree falls down in a forest, does this only happen if someone actually witnesses the event?

The fact that ‘value’ is part of the definition of creativity is for many hard to grasp. A friend of mine, who proofread my manuscript before it was turned into a book, asked me the philosophical rhetorical question: “When a tree falls down in a forest, does this only happen if someone actually witnesses the event?” In other words, aren’t creative works objectively creative, regardless whether they have an audience or not? If you are looking at the historical value of a creative work, the answer is ‘no’. Creativity is a subjective, cultural construct, because the people within each creative domain (especially the experts) decide what is creative and what is not. Creative domains are thus shaped by human rules. 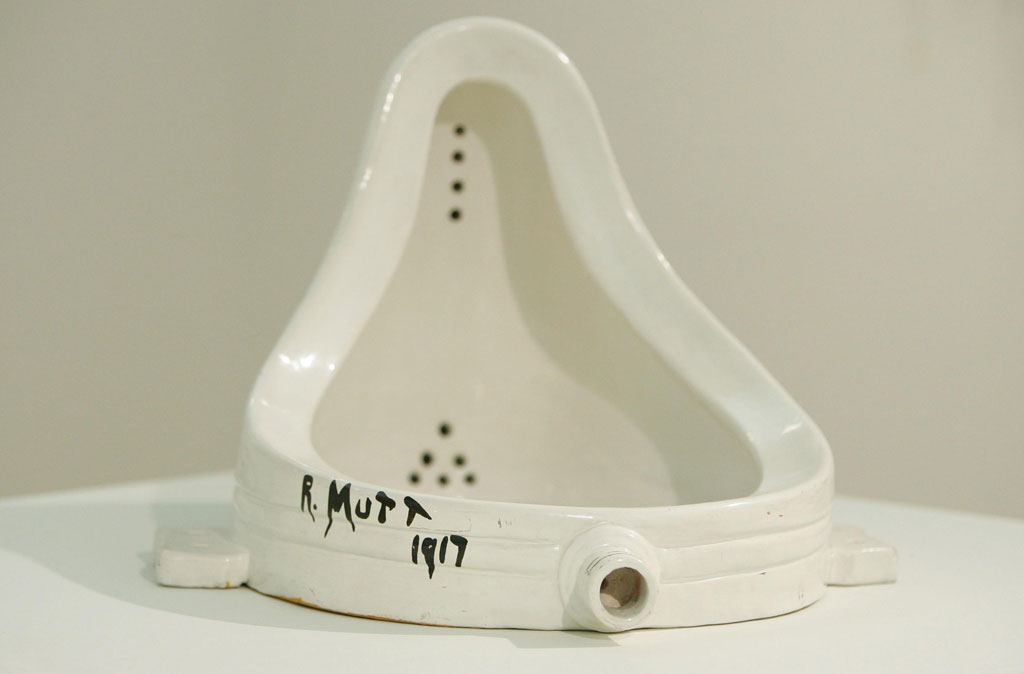 When Duchamp submitted a urinal to the avant-garde exhibition for anonymous artists, he simply dubbed it ‘Fountain’ and signed it R. Mutt. Photo credit: cassart.co.uk.

A urinal on its back
In my book I explain the subjectivity of the value of art by Marcel Duchamp’s famous piece called Fountain. It was conceived in 1917, when he bought a urinal, put it on its back, signed it with the pseudonym R. Mutt and submitted it to an exhibition of the avant-garde movement – of which he was one of the driving forces. By doing so he was conveying the idea that the meaning of art in the beginning of the 20th century was too narrow. With his art, he was basically saying: everything can be art! The irony of the story is that while the organizers of the exhibition had a similar view and wanted to democratize the meaning of art by allowing non-famous artists to submit their works anonymously, Duchamp’s work was rejected as art because it was an “immoral, vulgar, plain piece of plumbing” – as formulated in an art magazine, shortly after the rejection. His work was therefore too radical and stretching the rules of the domain too far.

Duchamp’s work was rejected as art because it was an “immoral, vulgar, plain piece of plumbing”

Since Duchamp’s urinal didn’t earn an audience in the subjective view of the ‘progressive’ avant-gardists, his work was destined to be forgotten and never earn any art-historical value. Fountain, however, was saved from oblivion when Duchamp’s profile in the world of art strongly rose in the 1950s and 1960s. Due to the growing number of gallerists and museums that wanted to display his work, Duchamp authorized his original Fountain (that was lost soon after it was rejected) to be duplicated several times. From then on the work earned a second life and its star rose quickly. In 2004 – almost 100 years after its conception – the work was even judged the most influential piece of art of the 20th century.

This does not just mean that creativity – and art – are dynamic constructs that constantly change, it also means the human factor is essential in giving art its value. This was also illustrated by the Brazilian pop-art artist Romero Britto who bought one of Bubbles’ paintings at the renowned art fair Art Basel in 2012. He acquired it to prove that even primates can make art – and probably not for its aesthetics. Which is not so much different from Duchamp’s (successful) attempt to turn an ordinary urinal into a ‘fountain’ by which he also wanted to stretch the meaning of art.

A symbiotic relationship
Though the ‘Apes that paint’ and today’s AI are both used as an extended arm, there is of course an important difference between primates and AI. The creative evolution of the chimp won’t be able to overtake us Homo sapiens, while AI is developing with incredible speed. Some predict that AI will already in 2040 become as intelligent as human beings – not just in a specific field, but across all knowledge domains. And from then on it has the potential to seriously compete and even overtake human beings creatively.

In the next decades AI will only be able to operate in specific domains, while we remain unique in mastering and combining knowledge from different domains

There is one thought that might give some relief when considering this daunting theory. In the next decades AI will only be able to operate in specific domains, while we remain unique in mastering and combining knowledge from different domains. So while AI will be taking over more and more human jobs (mostly those that consist of relatively uncomplicated, repetitive tasks), we will increasingly focus on being creative; making new stuff. And when we use AI as our extended arm in the creative process, by having it do our our research and trial and error, our relationship will be symbiotic, rather than competitive. In that case the aforementioned New York Times bestseller will be co-created, as it were, by ‘human-AI’ – a merger of technology and art.

But in all fairness, it’s virtually impossible to predict what will happen exactly – especially when at some point AI will have an intelligence far superior to ours, as some predict. If the tables turn this way, we might become the inferior species and thus the extended arm of AI. Or, if you will, the metaphorical chimp playing with paint.

Photo at the top is of an industrial robot that reproduces an art work of Austrian artist Alex Kiessling in 2013 – credit: qz.com/Matt Dunham.

On this platform I already wrote two articles about AI and creativity: “The road to singularity” (about the first steps toward creative AI) and “Why robots will work for us” (about how robots will also create human jobs, rather than just take them away).