Previous: Why robots will work for us 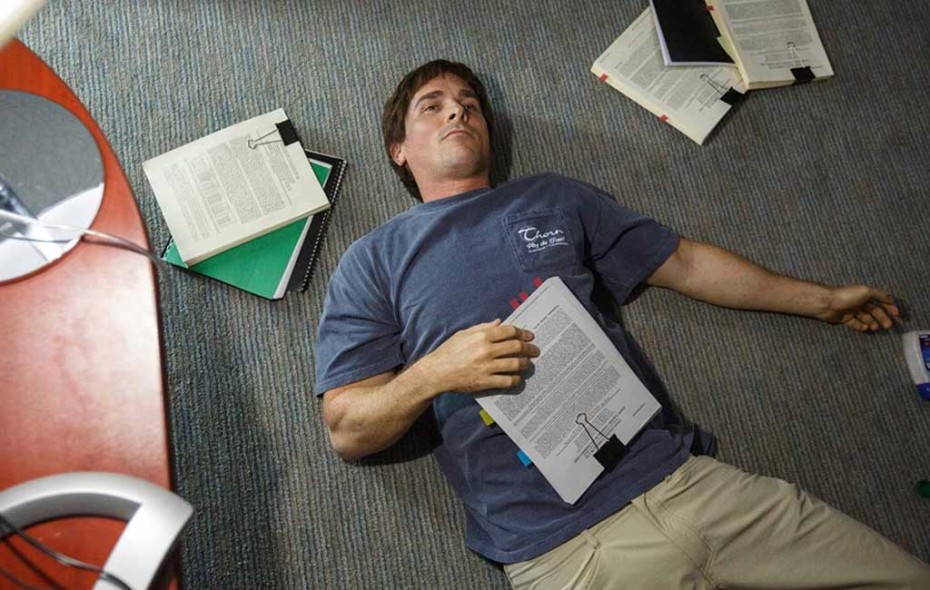 Last weekend I saw The Big Short (nominated for a ‘Best Picture’ Oscar 2016), a movie directed by Adam Mckay and based on a book with the same title by Michael Lewis. It’s about a small group of hedge fund traders who bet against the housing market by ‘going short’. Which means investing your money in such a way that when the market goes down you’ll make money – a lot of money in this case, hence the title of the movie.

Since no investment bank at the time could imagine the housing market to go down, they all thought Burry had lost it

The book is partly based on Michael Burry (in the movie Christian Bale – see image above), who in 2004 is the very first person to discover that the housing market is on the verge of collapsing. He anticipates the event by conceiving a “credit-default swap” on subprime-mortgage bonds – ‘subprime’ means that the borrower of the original loan has a bad credit history. Since no investment bank at the time could imagine the housing market to go down, they all thought Burry had lost it when he approached them to sell him his self-invented product. Greedy as the banks were, however, they eagerly accommodated him.

So, in the summer of 2005, roughly 2 years before the bubble starts to deflate, Burry has acquired credit-default swaps on $750 million in subprime-mortgage bonds, which would eventually translate into almost 500% profit for his investors and $100 million for himself.

The odd one out
In hindsight it’s easy to see that there was a real-estate bubble. Mortgage lenders were extending credit way too easily – often without even properly checking the incomes of the borrowers. They didn’t care about the bad loans, since they would repackage them in new products with difficult names, such as “synthetic collateralized debt obligations” and sell these products to equally optimistic investors. Until eventually large amounts of people – at the bottom of the pyramid, as it were – weren’t able to pay their mortgages anymore and the whole card house collapsed.

What makes Michael Burry special is that in 2004 he was the only (known) person on Wall Street who clearly saw what was coming. That’s a little odd seeing as Wall Street is infested with financial experts. I found out how different Burry was through an article in Vanity Fair, titled Betting on the Blind Side, featuring an excerpt of the aforementioned book.

First of all Burry was the odd one out in his appearance – as the movie quite realistically shows. He has a glass eye – due to a childhood tumor that cost him his left eye – which causes him to slightly turn away from the people he talks to. And he doesn’t care much about conventions; he walks barefoot in his office, always wearing shorts and a t-shirt. But underneath these visible features there’s more. There is a distinct reason why Burry not just acts differently, but also sees things differently.

Diagnosed with Asperger’s
Shortly before the housing bubble deflates Burry’s son is taken to a psychologist for having an over-active mind; he doesn’t sleep when the other kids are sleeping and easily drifts off when the teacher is talking. He is diagnosed with Asperger Syndrome. Burry, who is skeptical and thinks he might be over-diagnosed, reads a book about Asperger’s and finds out that all the typical symptoms are (also) applicable to himself. He suddenly realises that he can’t look people straight in the eyes because he has Asperger’s – not because of his glass eye. He also understands why he can’t develop true friendships (“I’m happy in my own head” he says), why he has difficulty to read non-verbal social/emotional messages and why he pursues his interests in a solitary and idiosyncratic way.

This last symptom is why school came easy to him. For example, as an undergraduate at U.C.L.A. he does English and economics, and picks up enough pre-medical training on the side to get himself admitted to the best medical schools in the country. He becomes a doctor but drops out when he finds out that he doesn’t like the social side of it. Since he has been reading the financial markets already for a while – quite successfully – he then starts his own investment fund, Scion Capital.

The book about Asperger’s even explains to him why he loves to work with computers; you don’t have to socialize with them and they are logical, consistent and not prone to moods. A typical anecdote that illustrates Burry’s active mind and interest in computers takes place when he is a resident in neurology at Stanford Hospital in 1998. He stays up two nights in a row between his 14-hour hospital shifts to take his computer apart and puts it back together in an attempt to make it run faster.

At this stage of his life he is diagnosed with bipolarity, but he knows that is not what’s wrong with him, since he is never depressed. He only possesses the upside of bipolarity, which enables him to focus his attention extremely well, for a long period of time, when something finds his interest. And that’s exactly what has helped him to see the collapse of the housing market coming.

Focus on the facts
Burry was obsessive in acquiring hard facts about the subprime mortgage market; he could easily scan through stacks of tedious financial statements. He would even read the subprime-mortgage-bond prospectus (and find out they were built on shitty loans), which was something only the lawyers did who compiled them. In addition, Burry hated to discuss his ideas with others, because when he had to defend his ideas others could influence him. Especially the sub culture of Wall Street traders is known for groupthink, so his Asperger’s helped him to not be distracted by his peers and stick to his strategy.

In short, it was his focus on the facts and his innate avoidance of social interaction that allowed him to see the world differently. And this is where I saw an important parallel with creative minds that have changed the world dramatically. These minds are often labeled crazy, before they are eventually proven right in seeing things differently. After they have changed the world they are easily re-labeled as geniuses. And while I am writing this down I am reminded of one of my favorite advertisements ever made, Apple’s ‘Think Different‘ commercial from 1997 (created by Chiat/Day); “The people who think they are crazy enough to change the world, are the ones who do“.

Regardless whether Burry is truly creative or not (there is a great amount of neural qualities that support creativity), my point here is that his story beautifully illustrates that Asperger’s is a disorder that can be a blessing in filtering out cultural biases towards the status quo and thus give a truly fresh perspective on the world as we generally know it.