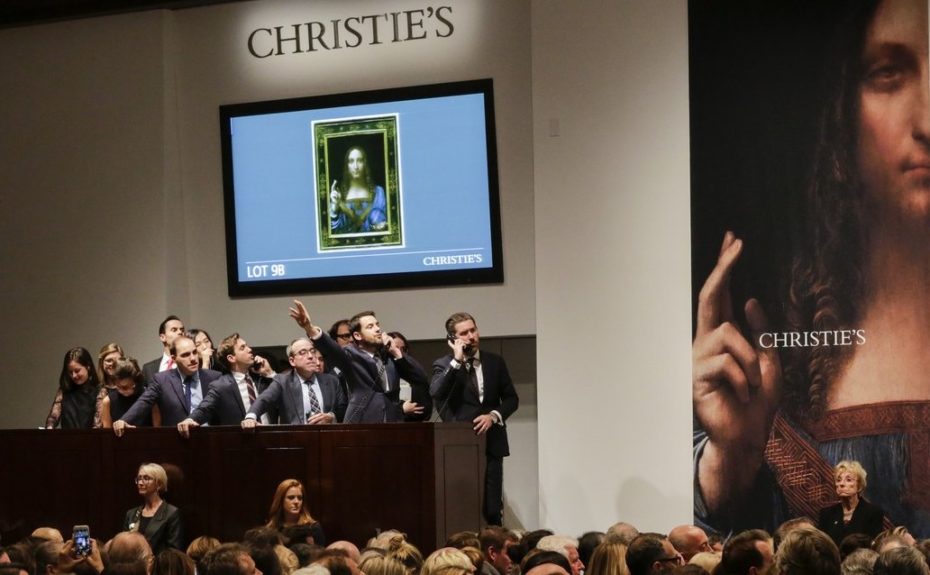 The importance of an artwork is usually measured by the price for which it sells today. By this standard, Salvator Mundi (‘saviour of the world’) by Leonardo da Vinci is the most important piece of art in the world. It was bought at Christie’s by a Saudi Prince (to be displayed at the Louvre Abu Dhabi) for $450 million in 2017. The work, also dubbed the male Mona Lisa (understandably also by Christie’s marketing department), is undeniably famous. And possibly became even more famous after its unveiling was mysteriously postponed in 2018 due to doubts about the painting’s providence and/or the quality of its radical restoration (some say the painting has been over-restored).

Measuring creativity
When I read about the whopping amounts of money paid nowadays for famous art I become somewhat cynical – especially when there are doubts about a work’s value – and ask myself the question: but is it creative? Just like immovable property, art has become a solid investment that tells you more about the artist’s fame than the creativity of the work. It attracts people with too much money and too little interest in the artistic level of the work itself.

But even if you’re a real art lover and more interested in an artwork’s intrinsic qualities than in making money, it’s not easy to measure a work’s creativity. The reason is that you should always judge a work’s creativity at the time it was conceived of.  We tend to judge a work from a contemporary point of view, while the creativity should be judged in its original artistic context (see also my short piece on this platform about an experiment in which Malevic’ work was copied and unsuccessfully used for entering art school).

This indicates that Salvator Mundi’s theme, for one thing, was not very original

According to the most common academic definition of creativity you can measure creativity by the originality of a work in combination with the value that is given to it by society. On the first criterium, originality, Salvator Mundi doesn’t necessarily score very high. In his biography about Leonardo da Vinci, Walter Isaacson describes the work as follows: “﻿The Salvator Mundi motif, which features Christ with an orb topped by a cross, known as a globus cruciger, had become very popular by the early 1500s, especially among northern European painters.” This indicates that Salvator Mundi’s theme, for one thing, was not very original.

Influencing other artists
If you judge the value – the second criterium – of Da Vinci’s world-famous painting on walnut at its conception, it doesn’t score that well either. And I don’t just mean its monetary value, because the price that is paid for art after its conception is often misleading. Take the example I use in my book; Van Gogh dying a poor man (during his life, the only person interested in his paintings was his brother Theo, who wasn’t able to sell them). Another example discussed on this blog was Duchamp’s (or, more accurately, Von Freytag’s) famous fountain; it was judged too vulgar to display in an exhibition and got lost shortly after it was created – only much later when it resurfaced it became valuable.

A better way to measure a work’s value is to look at its influence on others. In 2015 I wrote an article about an algorithm – created by Rutgers University – that is able to measure an artwork’s creativity by the influence it has had on other artists. In a way, influence combines originality and value – i.e. appreciation by peers. If you are the first to create something that is entirely new and other artists copy your new theme, concept, style or technique, your work is of influence and definitely creative. When evaluating Da Vinci’s Salvator Mundi along the lines of this study, it is indeed not necessarily valuable. Even though some of Da Vinci’s pupils might have directly copied the painting to practice their skills, in the 16th century there is not much proof of the work becoming appreciated or influential in the art world.

Da Vinci himself, however, in his time definitely influenced others. Especially through his sophisticated painting techniques. The most famous example is probably sfumato, a technique that softens the transition between shades of colour to avoid outlines and create a more realistic image. Sfumato is one of the most important features turning the Mona Lisa into a famous piece of art. About Da Vinci’s creativity his aforementioned biographer is unambiguous; “his ability to blur the line between reality and fantasy, just like his sfumato techniques for blurring the lines of a painting, was a key to his creativity. Skill without imagination is barren. Leonardo knew how to marry observation and imagination, which made him history’s consummate innovator.”

Fame as an illusion of creativity
There is no doubt Da Vinci earned his fame. As we all know, he was extremely innovative in many different fields – the arts, sciences, humanities and technologies – and therefore a quintessential polymath. But separating his fame from his work, is an interesting exercise in the context of creativity. And it is exactly what Mitali Banerjee (HEC Paris) and Paul L. Ingram (Columbia Business School) have done in their article Fame as an Illusion of Creativity: Evidence from the Pioneers of Abstract Art.

Banerjee and Ingram researched an artist’s fame, which they defined in terms of how well-known artists were beyond their own social circles. Their most striking conclusion is that fame doesn’t necessary follow from creativity. Instead, they say that fame largely depends on the diversity of one’s social network. So, while people tend to stick to a clique – a homogenous social circle – being part of diverse social worlds might be more beneficial. What’s more, the greatest predictor of fame is having a network in various countries. This means that if you want to become a famous artist, your networking skills – across social circles and geographic borders – are much more important than your creativity. This is a bit of tricky statement, since having a large, international network will undeniably generate more (exotic) inspiration, which might feed into your creativity. And if you have a large (and diverse) network it might be easier to exhibit and sell your work, which gives it more influence and theoretically makes it more creative. However, according to this study this is not necessarily the case.

Banerjee and Ingram studied the fame of 90 pioneers of the early 20th century abstract art movement, between 1910–25

Banerjee and Ingram studied the fame of 90 pioneers of the early 20th century abstract art movement, between 1910–25. They measured their fame by using Google Ngram Viewer, which is a search engine that searches through 8 million books – representing 6% of all the books ever published. The more a name is mentioned between 1910 and 1925 in the database, the more famous the artist is. They also map the networks of the artists by establishing personal or professional relationships between the different artists, which is done more or less ‘manually’ by MoMa curators specializing in the studied period.

Next to establishing fame, the scholars measured the creativity of thousands of artworks by the studied artists in two ways; an expert evaluation and an image recognition algorithm. The former method consists of asking the expert questions about the different works along the lines of 5 dimensions: originality (breaking from known aesthetic precedent), uniqueness, stylistic diversity (working in different styles, media, techniques, etc.), abstraction (i.e. non-figurative) and innovativeness (the first to come up with a new artistic style). The image recognition algorithm rated how unique the different artworks were in comparison to a set of representational artworks from the 19th century. The researchers found that both the human and software scores were positively correlated. And, more importantly, that the creativity of the works wasn’t an indicator of an artist’s fame.

Making more of the same
What to me is most interesting about this research is that it shows that even though creativity may be a cherished value among art experts, it does not necessarily translate into greater rewards for the artist. Banerjee and Ingram even say that the study confirms earlier research in social psychology suggesting “that we are likely to underestimate highly original ideas because of the cognitive difficulties in accessing attributes relevant to evaluate such ideas”. Simply put: we don’t like what we don’t know. This is what happens, for example, in the world of feature films – to compare classical art with a more modern creative domain. Hollywood prefers to allocate big budgets to known blockbuster franchises (such as Batman and Star Wars), rather than experiment with new concepts, because the average consumer prefers familiarity. So, by making more of the same you avoid the risks of making an expensive film that flops.

Banerjee and Ingram also compare art with the creative domain of science. Scholars in sociology of science argue that original theories and results that abandon the existing paradigm are regarded as ‘anomalous discoveries’. These discoveries are usually ignored by the scientific community; “such original theories threaten the position of the stakeholders who have invested themselves in the prevailing paradigm”. And I’d like to specify; who have invested themselves intellectually, emotionally and/or (again banally) financially.

If you are creative and want to make money at the same time, your safest bet is to invest in becoming the center of a big, international network

Cynically, the bottom line of this piece of research is that if you are creative and want to make money at the same time, your safest bet is to invest in becoming the center of a big, international network and build your fame on top of it. Having a strong network with peers and especially alters is more valuable – in terms of rewards – than creating art that is ahead of its time and might – if you’re talented, driven and lucky enough – influence your creative domain on the long run. In a way, Banerjee and Ingram have thus confirmed Paul Cézanne’s insight that “the most seductive thing about art is the personality of the artist himself”.

Photo at the top: In 2017 Leonardo da Vinci’s Salvator Mundi was sold at Christie’s in New York for $450 million, the highest amount that has ever been paid for a work of art. Photo credit: Architecturaldigest.com.