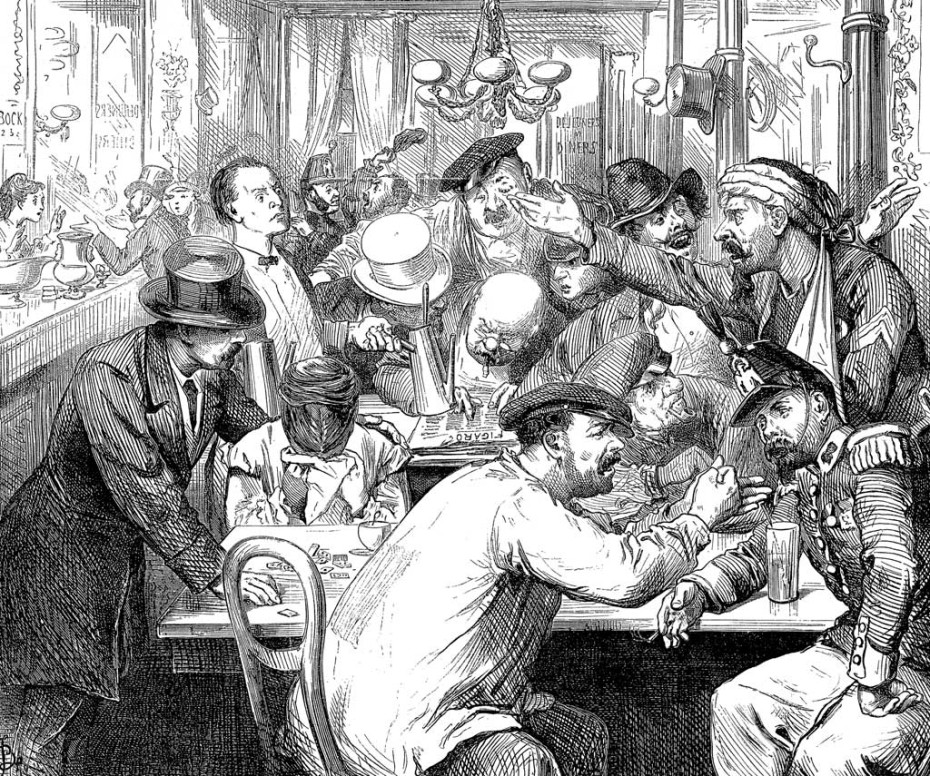 A few weeks ago, I did a lecture about creativity at Amsterdam based design agency VBAT, and someone in the audience at the end asked me; “How do you think social media influence creativity?” An interesting question that I answered by saying that social media make the interaction between individuals more efficient and thus catalyses the creative process. I also said that social media make ideas spread faster. When I later thought about it some more, I was able to formulate six different – but related – positive influences social media have on creativity.

The coffee house is famously known to be a catalyst for creativity because it brings different backgrounds, views and ideas together

1. Democratic conversation
The most obvious benefit of social media is that they have turned the coffee house into a digital chat room. The coffee house is famously known to be a catalyst for creativity because it brings different backgrounds, views and ideas together. It thus provides the creative mind with a broader view and improves the chance of running into an interesting piece of information that helps him to conceive and shape his ideas. Steven Johnson talks about this wonderfully in a TED talk and writes about it in Where Good Ideas Come From, one of my favourite books on creativity.

The big advantage of the digital coffee house over the traditional one is that the conversation between individuals has become more fluent and democratic, which thus intensifies and extends the possibilities of interaction. Now even Mike from Australia can join the conversation on someone’s wall in Europe. And the first-year student chipping in his 2 cents is now judged on his arguments, rather than his social status.

2. Efficient collaborations
A good example of a democratic conversation (partly) enabled by social media is the “Banking Blog” Dutch Journalist Joris Luyendijk launched in 2013 on TheGuardian.com. Apart from doing lots of research Luyendijk sourced from the people who contributed their insights to the blog. He went “native in the world of finance” so that his articles became the product of a creative collaboration with the experts in the domain of banking. Social media helped him to source from the experts.

This example shows that social media are a tool to communicate more efficiently with a big group and at the same time enable us to react directly on individual comments. Social media thus uniquely combine mass communication with individual communication, which makes more complex creative collaborations easier and more effective.

3. Cutting out the middleman
Nowadays, a journalist conversing with his readers is nothing special, but you would almost forget that not very long ago the journalist was quite difficult to approach and share your thoughts with. If you wanted to add a comment to an article, you could send a (physical) letter to the editorial staff of the newspaper, and only when important, knowledgeable and/or eloquent enough, the newspaper would print your point of view. Today you simply tweet your comment and tag the journalist, without having to go through his editorial staff.

This is a good example of going around the experts that traditionally guard the creative domain. Other examples are musicians bypassing the music label by self-publishing their work on YouTube or an artist bypassing the gallery by sharing his work directly through social media and thus slowly (or very quickly) gathering a following. These more direct ways of creative minds interacting with their audience is not just made possible by social media, but more generally by the world wide web. The internet’s ability to ‘cut out the middleman’ is adequately described in Jeff Jarvis’ book “What Would Google Do?”

4. Inspiration everywhere
Another big advantage of social media is that today we are inspired by a much wider selection of sources. When we scroll through our Facebook, Twitter, Tumblr or Pinterest walls (to name a few) we scan an endless amount of ideas. From individuals that are wondering about something out loud, to individuals sharing a well-written article from an established source. From sharing a picture you just took or a silly internet-meme, to the artist sharing his new work, a museum a new piece of art, or a writer his new book. All these social shares can potentially be the missing piece of knowledge that you can use to form a creative idea.

And it’s not just the likeminded people with whom you’d normally drink a coffee that are able to inspire you, even the content from people who you don’t know now easily reaches you. In fact, these ‘remote’ sources have more potential to provide you with creative inspiration than the obvious sources that typically circle around you.

5. Ideas spread faster
Since Facebook has almost reached the same population as China (in beginning of this year it reached 1.23 billion monthly active users) and offers a fluent network of six degrees of separation, ideas easily spread around the globe with the snap of a finger through this social medium. And this goes for every social medium with a critical mass. Some ideas are so strong that you see them being shared on social media all day long and for days on end – an example that I remember quite well is street artist Banksy on tour in New York City last year.

So, if an idea is new and valuable enough – which is always a basic condition for an idea to spread – it is difficult for it to stay unnoticed. This faster distribution of ideas increases the speed with which creative domains evolve.

6. (Future) creative distribution
One of the consequences of so many media rapidly spreading ideas around the world is that it very slowly but steadily makes us move towards a global culture. And here is the first disadvantage of social media; when we globally consume the same content and become part of the same trends, we will be likely to come up with the same ideas around the world. It’s easier to be original when using sources that not many people have access to. For example, visiting an Indian tribe in a primal rainforest (or, to keep things digital, reading a wiki about it) will literally reveal an incredible amount of exotic ideas that may inspire you.

Another disadvantage of social media is that we tend to use them in a way that they only reinforce the knowledge structures in our head. In fact, that’s how social media are often programmed, they learn what we usually consume and appreciate, and then simply serve us more of the same. However, the inspiration with the most creative potential comes from knowledge that doesn’t automatically match with what we already know.

The reason however why I am not at all too pessimistic about this global culture and those lazy algorithms is that the amount of knowledge and (social) connections on the internet constantly increases. At the same time social media will become more sophisticated, distributing content with greater (associative) relevance and creative potential, so that our global, digital coffee house will easily become the most fertile place for ideas to be born and grown.