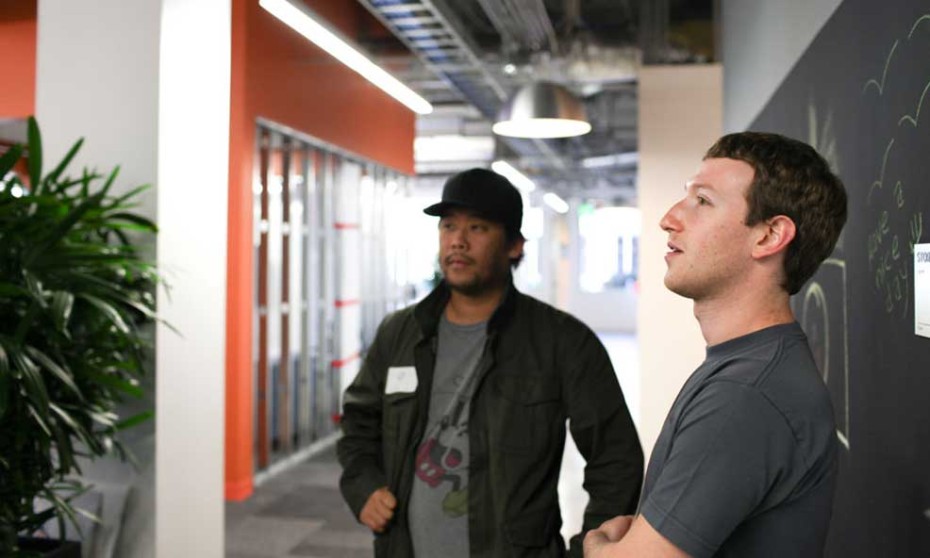 Yesterday I was watching an old episode (aired 3 May 2013) of De wereld van Klöpping (‘Klöpping’s World”) a Dutch TV program in which Alexander Klöpping, a well-known tech commentator in the Netherlands, shares his knowledge about Silicon Valley; its history, the companies that have settled there, the newest innovations, and its gossip. During the show Matthijs van Nieuwkerk, the other presenter, asks him; “How do you recognize tech nerds?” Klöpping answers: “They wear t-shirts because they don’t care about their looks.” That’s interesting. While programmers can easily be as creative as artists, they dress quite differently. And generally even live completely different lives.

David Choe
In his program Klöpping shares an anecdote that beautifully illustrates the contrast between the life of a ‘tech nerd’ and that of an artist. David Choe (left in picture), a well-known graffiti artist who is known for behaving like a rock star, created some murals for Facebook’s office in 2005. Back then Facebook was still in its infancy and relatively easily gave away shares. So it made Choe an offer; he could choose to be paid $60,000 in cash or earn some shares in the company. Though Choe didn’t believe in Facebook’s business model (“ridiculous and pointless”) he gambled and chose for a share in the company. A wise choice; when Facebook went public in 2012 his shares were worth $200 million, which instantly turned him in one of the richest artists alive. For comparison, Damien Hirst – who’s work I discuss in my book and who is known to be the richest artist alive – has an estimated wealth of $350 million. When Klöpping explains that Choe spent most of this money on coke and prostitutes, Van Nieuwkerk asks; “Is that typical for nerds, that if you have money you spent it on coke and prostitutes?” Klöpping, a tech nerd himself, rebukes; “No way, he was an artist!”

Speaking different languages
So how come that artists are known for their eccentric looks and extravagant lives with sex, drugs, and rock and roll, while tech nerds (and scientists too, for that matter) generally lead more modest, sober lives, not so much caring about their looks, but all the more about changing the world?

First of all there is a cerebral difference between techies and artists. The reason is that techies speak a different language compared to artists. Code, the language for building websites, apps, and other digital tools, is an objective, non-emotional language. Artists, on the other hand, speak a language of their own. A language that is personal, ambiguous, and more often emotional, because artists are on an introspective journey when they create and through their art express their feelings. This makes their lives more capricious and their looks more in touch with their inner selves.

The second reason is a cultural one. To understand the cultural differences between creative domains, one needs to understand the role of the creative expert. Each creative domain has experts that judge whether new works deserve to be valued. In the artistic domain, the experts are – among others – the galleries and museums that exhibit art. In the digital start-up domain these experts are – among others – the angel and venture capital investors that need to believe in a concept to help it grow. You could thus say that in each creative domain the experts are the gatekeepers that decide whether new ideas should get a chance to earn a larger audience or grow.

Seducing the experts
Since the personality of the artist is part of his work, his personality also influences the appreciation of his work. To illustrate this I use a quote in my book by post-impressionist Paul Cézanne: “The most seductive thing about art is the personality of the artist himself.” In other words, an eccentric artist simply makes a more interesting story – not just for galleries, but also for journalists. In the world of start-ups the seduction is less personal, it is mostly about presenting a concept that simply works. In the scientific world more or less the same goes, it is mostly about proving a theory. The story of the creator is less important.

Funnily enough though even in Silicon Valley nerds are expected to dress in certain ways and adopt certain lifestyles. It’s no coincidence that Steve Jobs (Apple), Mark Zückerberg (Facebook, right in picture), and Jan Koum (WhatsApp and since last week also Facebook) all walk(ed) around their offices bare feet. It is to stress that they don’t give a fuck about their looks; it’s all about their products. And, as for lifestyle goes, you earn kudos in Silicon Valley for working 24 hours non-stop, sleeping underneath your desk, and living on Red Bull.

So, even though in some creative domains a personal, eccentric look is more important to be appreciated by the experts that guard the domain, each creative domain has its own dress and lifestyle conventions.