Previous: The beauty of creativity 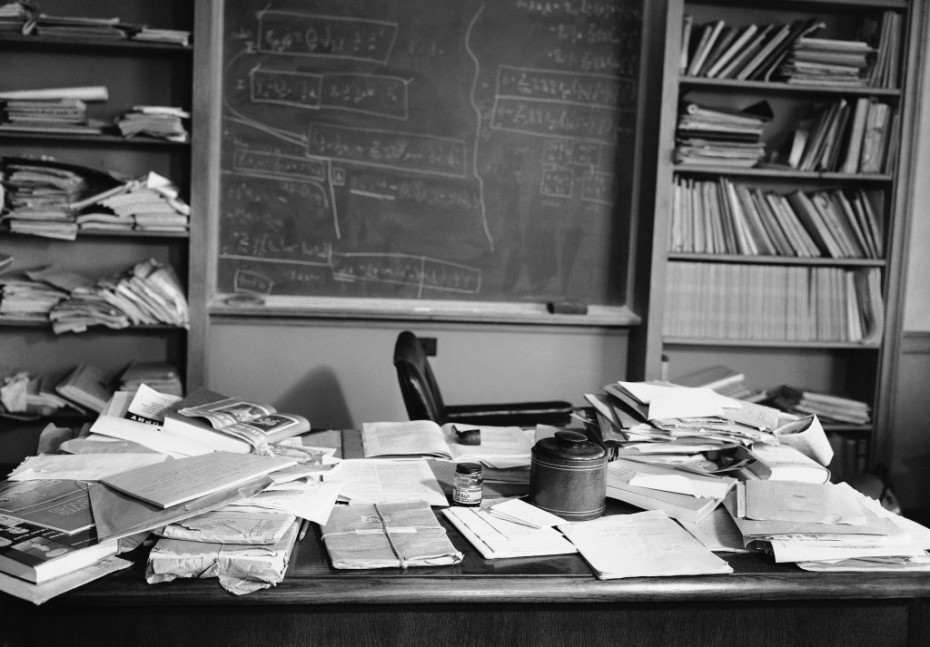 A ‘cluttered’ mind, overflowing with thoughts and emotions, may feed into creativity. But clutter is not enough.

Apart from being a creative genius on the intersection of mathematics and physics, Albert Einstein also wasn’t bad in juggling words. The man has quite an impressive list of lucid quotes. One that came to my mind last week is:

The reason I was reminded of Einstein defending his disorganised desk is that I read an article by Scott Barry Kaufman in the Scientific American about how a ‘cluttered’ mind is actually conducive to creativity.

The cluttered mind
‘Cluttered’ is not exactly the scientific word to use, but the article explains how creative people often include more stimuli (what we see, hear, smell, taste and feel), thoughts and emotions into their mental processes than less creative people while engaged in idea generation – e.g. coming up with as many solutions for a given problem as possible or imagining the consequences of something ‘unimaginable’ happening (“What would happen when we would be able to walk on air?”).

Creative people often include more stimuli, thoughts and emotions into their mental processes

A disadvantage of a broadened attention – letting in seemingly irrelevant information – while trying to focus on solving a problem is that your thoughts easily get derailed, disorganised or tangential. In other words, with a cluttered mind it is more difficult to channel the abundance of information into a specific cognitive task. This disadvantage in its more extreme form can even be a symptom of schizophrenia, which is one of the reasons why scientists have established a link between creativity and mental illness.

The important advantage however of a mind cluttered with random thoughts is that it becomes easier to associate disparate ideas that dwell in different knowledge networks. Or, simply put, it becomes easier to “make unfamiliar combinations of familiar ideas” – the definition of creativity.

Latent inhibition
The reason why creative minds take in more stimuli while working on a creative task is a reduced ‘latent inhibition.’ Latent inhibition is a filtering mechanism that especially gives meaning to novel stimuli. The purpose of this filter is that our limited attention shouldn’t be wasted on familiar stimuli that we’ve already categorised and seamlessly adopted in the way we perform our daily tasks. Latent inhibition thus helps us to experience the world in a manageable way. When we walk through a door, for example, our unconscious mind immediately categorises it as a door so that we don’t pay much attention to the details of it. Only when the door really stands out, we’ll start wondering why this door is so much different from other doors. Mammals have the same mechanism, which from an evolutionary perspective helps them to focus their attention on the atypical, potentially dangerous, stimuli around them.

I recently experienced the effect of latent inhibition in my closest group of friends. I bought a new, though similar, pair of glasses and it struck me that only my more creative friends noticed it. This anecdote is (statistically) of no scientific value, but it made me realise that what in daily life is called ‘eye for detail’ might actually be reduced latent inhibition. A ‘normal’ person’s brain ignores my pair of glasses because it has seen my glasses many times. It will only award attention to my glasses when they are, for example, suddenly bright red. But when one has low latent inhibition, even the subtle changes draw attention. You can do a similar experiment yourself; next time you’ve gone to the hairdresser, see who notices it and who doesn’t. The theory is that people with reduced latent inhibition will.

Another quote that can be related to the mechanism of latent inhibition and seems striking in this context is Nobel laureate Albert Szent-Gyorgyi’s definition of discovery:

“Discovery consists of seeing what everybody has seen and thinking what nobody has thought.”

Organised mess
If the cluttered desk is a metaphor for a cluttered mind, Einstein can indeed be proud of his disorganised working room. But we’re not quite there yet. In another, very recent article Kaufman explains that the creative task of quickly generating a large number of original solutions to a problem also requires ‘cognitive control,’ which means “the ability to inhibit irrelevant thoughts, quickly update the current contents of working memory, and flexibly switch attention from one aspect of the problem to another.” The advantage of a high level of cognitive control is that you’ll score higher on IQ tests and standardized academic tests. And for those with reduced latent inhibition this control helps to productively channel the overwhelming amount of sensations into a specific cognitive task.

So, to extend the desk-metaphor, the cluttered desk is not enough, you also need a system that helps you to quickly discard, find and switch between the different items on your desk. A good compromise might be a desk filled with different piles of categorised information on it.

The cluttered desk is not enough, you also need a system that helps you to quickly discard, find and switch between the different items on your desk

Real-world accomplishments
But we’re still not there yet. In his most recent article Kaufman also explains how “creativity lies on a spectrum, ranging from the everyday creative cognition (…) to the real-world creative achievement seen in publicly recognized domains across the arts, humanities, and sciences.” Simply put, this spectrum lies between being a thinker and a doer.

Creative thinkers, with a combination of reduced latent inhibition and high level of cognitive control, perform very well in the ideation phase. However, coming up with an idea is not the same as turning an idea into a physical, real-world accomplishment. That’s the other half of the creative process. Scientists, for example, have to do lots of experiments, write scientific articles and get publicised to achieve real-world recognition for their creative efforts, while the artist needs to ‘build’ a piece of art and find someone to exhibit it to reach an audience. Without the physical form – or medium, as it’s called in jargon – one never knows whether an idea will be valued by the people that matter in the creative domain.

To make this second, executional part of the creative process happen, many other factors play a role. There are intrinsic factors, such as motivation, inspiration, drive and persistence, as well as extrinsic factors, such as resources, opportunity, luck and social support. These other factors operate on a much longer timescale. To give a famous example, the idea for a light bulb was relatively easy conceived, but finding out which physical form performed best in the real world took Edison more than a thousand experiments.

So, the semi-cluttered desk, with many different piles of information that can be quickly channelled into a creative idea, just forms one part of the creative process. The key to creative success is to not just sit behind your desk, because eventually creativity can only prove itself in the ‘real’, physical world that lies outside the theoretical brain.